Rehearsal rooms near USC Thornton School of Music are full on weeknights. Walk past it and you’ll hear an eerily pleasant dissonance. Classical music and jazz compete with a riffing saxophonist on the intro to “Careless Whisper.”

On a recent party, explosions of vihuela, guitarrón, violins and trumpets soared through this mix. The traditional mariachi melodies stopped and started again, tightening with each pass of melodies that oscillate from festive to melancholy.

“El Rey”, “Si Nos Dejan”, “Acá Entre Nos”, and “Hermoso Cariño” are just a few of the many standards in the repertoire of the more than three dozen USC students who make up USC’s Mariachi Los Troyanos.

“Mariachi is the most beautiful music in the world, and being in the heart of Los Angeles – such a diverse, Latino-centric space – it’s important to find a way for students to express themselves culturally and creatively,” said declared Eduardo Cardenas, the president of the group. “We bring a lot of fun, a sense of inclusiveness, and we’re all professionals, so we bring great music.”

Cardenas is a mechanical engineering student at USC Viterbi School of Engineering at Bell, graduating from East College Prep Charter High School in Lincoln Heights. He is a fourth generation mariachi and his extended family includes dozens of professional musicians. Cardenas performs weekend concerts with his father and uncle, which he never imagined as a young boy.

“I always wanted to get away from that,” Cardenas said. “School was always my calling, and after a while my parents stopped trying to force me to learn mariachi. I went through a rock phase in middle school. When I got into high school, I began to realize how beautiful mariachi was. I was blessed to have a teacher at home. My father gave me the discipline to be the best, and the best decision that I have ever taken was to learn the violin.

When she accepted admission as a classical guitar major at USC Thornton School of Music in the fall of last year, Daniela Santiago called El Sol y La Luna, the upper floor, home. USC Latinx Residential College Special Interest. It was the best place for Santiago and co-founder José “Pepe” Romo to form a mariachi ensemble.

“By showing up, I recruited people,” Santiago said. “I passed the word on the girls’ floor, then I went down to the guys’ floor. We connected and said, ‘We’re going to make this happen. We’re going to start rehearsing.

The band practiced in the Cardinal Gardens parking lot and later at the Latinx Chicanx Center for Advocacy and Student Affairs (La CASA) before moving to rehearsal space at USC Thornton. The momentum sped up last spring when USC’s Mariachi Los Troyanos took top honors at USC Songfest. Several shows of all sizes followed, from the big El Grito Mexican Independence event at the East Los Angeles Civic Center to the Lululemon store at USC Village.

The ensemble flexes like an accordion depending on the venue, the event, the host’s budget and the availability of the musicians. A band of five – with a guitar, a viola, two trumpets and a violin – is a common setup, but the number of musicians can easily reach double digits.

USC’s Mariachi Los Troyanos has a roster of around 40 players. Band members turned out in large numbers for campus events, such as the Latinx Heritage Month Closing Ceremony.

“We just want to share the mariachi with everyone,” Santiago said.

A founder’s desire to scale up

Originally from Austin, Texas, and the daughter of immigrants from Mexico, Santiago grew up loving music of all kinds. His ears were often plugged into the radio. 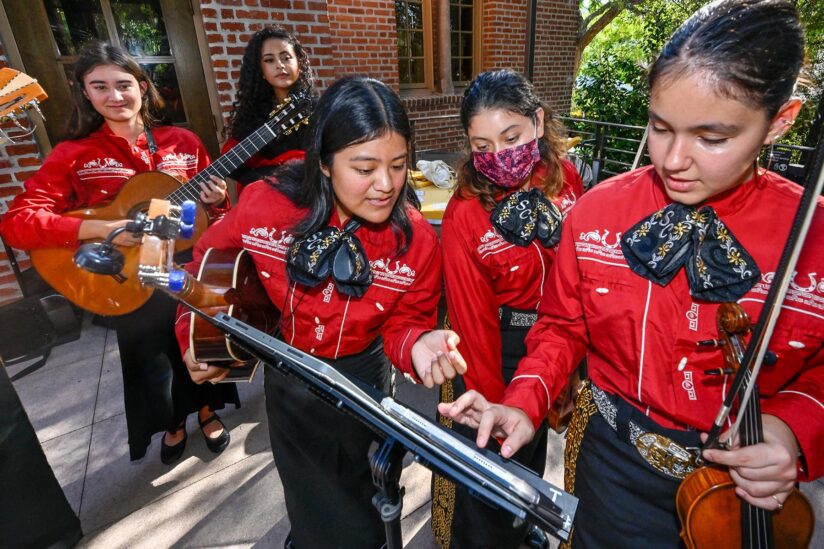 “I always wanted to learn to play an instrument, but I just didn’t have access to it until seventh grade,” Santiago said. “I enrolled in a music program, started out as a violist, and have been playing mariachi since eighth grade.”

Santiago then studied classical guitar but remained close to the mariachi, attending a music camp at the University of Texas at Austin, as well as regional competitions.

“I was able to get into every college and conservatory I applied to, USC being one of them,” Santiago said. “UT Austin has one of the best collegiate mariachis. They’re very competitive, they’re at an elite level. I got a free ride there and I knew the faculty, but USC felt good.

But one thing was missing at USC when it came to Santiago: there was no mariachi band.

“I was shocked to learn that USC didn’t have a mariachi,” Santiago said. “UCLA has one; UC Berkeley has one; USC must have one.

Santiago, who describes USC Thornton’s guitar faculty as the best in the world, turned to guitar teacher William Kanengiser, who is an advisor to the faculty.

“I told Bill, ‘I grew up listening to it, I’ve played in competitions and big events, I love sharing music with everyone,’ Santiago said. “He’s going there. having a lot of people who have the same interest as me.” Bill was even more excited than me.

Kanengiser led an effort by USC Thornton to outfit the instrument cluster. The school’s classical guitar department tapped into a fund created by author Jonathan Kellerman and purchased a guitarrón and a vihuela.

“As soon as you meet Dani, you’re struck by her drive, her passion and her love of music,” Kanengiser said in an interview with USC Annenberg Media. “Although she is a small person, she can fill a room with her smile and her energy. Her dream is to create a band at USC that will represent the Hispanic culture of USC students, not just while she studies here, but for generations.

Santiago, who shares the credit with his fellow mariachis, sees big gigs ahead.

“The Hollywood Bowl, playing with the marching band, the football games,” she said. “We think big.”

The band that skipped a beat

USC’s Mariachi Los Troyanos is not the first Trojan mariachi ensemble. The university’s last mariachi band formed in 1996. It was called California’s Mariachi Sur, but was often simply referred to as USC Mariachi. Esau Perez played guitarrón in the student-run organization.

“We weren’t necessarily accepted by the general population at USC,” Perez said. “We didn’t have a lot of resources. But I’m so proud of my heritage, proud to be a USC graduate. For me, being able to share my heritage on a campus that I loved was a big deal.

The band Perez was a part of continued in various incarnations for about a decade, but it struggled with longevity.

“As soon as the leaders graduated, it was almost like the band had to start all over again,” Perez said. “Mariachi was never a course offered in college. It was something we hoped we could do given the popularity of the music and the location of USC. It’s such a hotbed for this type of music.

Through a personal connection to one of USC’s Mariachi Los Troyanos members, Perez became involved with the new group last year and has seen their performances more than 20 years after graduating.

Seeing the mariachi come back is quite moving.

“To see the mariachi come back is quite emotional,” Perez said. “Seeing how brilliant these kids are, I was incredibly impressed with the quality of the youngsters I saw. I got to talk to them and get to know them personally. As an elder, I was immensely proud about the music and what they create, but more so about the quality of the students USC recruits.

Cardenas and Santiago smile sweetly as they play, while cantante Alberto Gonzalez musters the lyrical energy the mariachi demands for songs of love, loss, or devotion.

The musicians seem to be more in tune with each other with each rehearsal. However, like everything related to the college experience, the whole in its current form is ephemeral.

“A lot of my Latinx friends are going into STEM,” Santiago said. “A lot of them end up giving up music. Not me.”

Cardenas, who will graduate from engineering in two and a half years, reflects on his family’s mariachi heritage as he ponders his future.

“My dad said, ‘Once you graduate, you never have to take the violin again, but if you ever want to come back, you’re always welcome,'” Cardenas said. plays, it’s a timeless memory.”