Shanghai-born erhu master Jiang Jianhua has played an important role over the decades in introducing the traditional Chinese musical instrument to the world.

His performances have impressed famous conductors such as Herbert von Karajan and Seiji Ozawa.

The Shanghai native began learning the erhu under the influence of her uncle at the age of 10, then was admitted to China’s Central Conservatory of Music.

In 1978, Japanese conductor Seiji Ozawa visited China and was deeply touched by his performance of the classic erhu piece “The Moon Reflected on a Fountain”. Since then, Jiang has been frequently invited to perform overseas.

In 1986, Jiang performed at the opening concert of Suntory Hall with the New Japan Philharmonic. She performed the Concerto erhu composed for her by Kei Anjo under the direction of Seiji Ozawa.

In 1987, she was invited to work with Ryuichi Sakamoto and to record the soundtrack of the famous film “The Last Emperor” by Bernardo Bertolucci.

“When I was invited to Japan to play the erhu, I noticed that many Japanese audiences found the foreign instrument appealing,” she said. “The sound of the erhu is the way Japanese people express their emotions. Many Japanese composers began to take an interest in the erhu and wrote songs for it.” 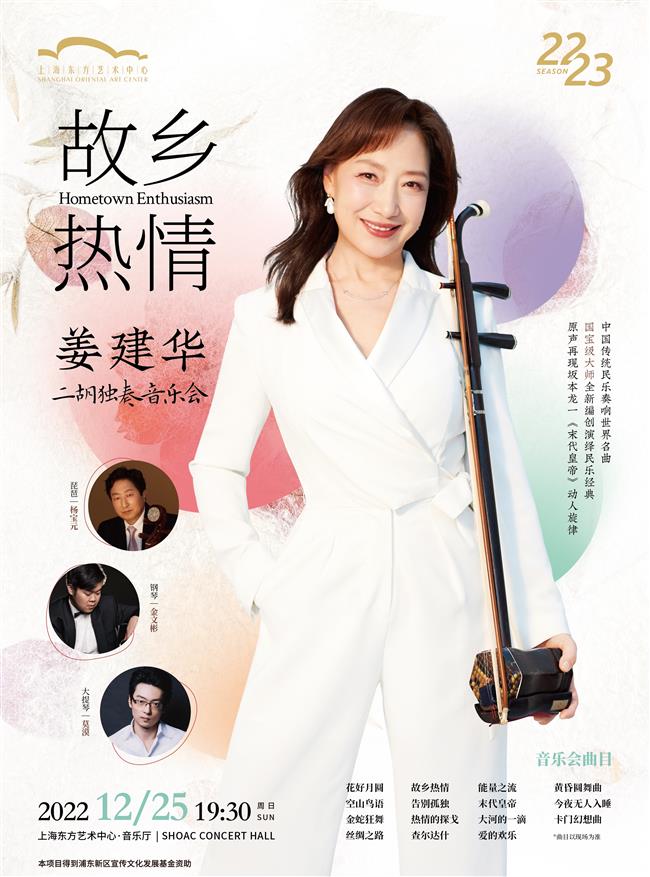 A poster for Jiang’s concert in Shanghai

Jiang lived in Japan for 20 years before returning to China. She was appointed as a professor of the Central Conservatory of Music of China in 2007.

In December, Jiang will be joined by pipa master Yang Baoyuan, pianist Jin Wenbin and cellist Mo Mo for a concert titled “Hometown Enthusiasm” at the Shanghai Oriental Art Center.

Besides classical erhu pieces, Western classics and contemporary Japanese music will be fused with Chinese folk music through creative composition.