You studied painting and drawing at university. How did your training at the Beaux-Arts influence your violin making?

“I’ve been working on instruments for a number of years now, but guitar designing/building wasn’t on my radar until I was in my early thirties. I did indeed study fine art at Concordia University, earning a living as an artist in my twenties, while exploring the Canadian gallery scene. I grew up in a creative environment doing mural work and scenic painting for my parents’ design firm in Montreal. Working for them as a child was my first experience in a “workshop”, a work environment that immediately seemed natural to me and that has followed me throughout my career.

“I would say that my choice of non-traditional materials in certain guitar designs and my willingness to work on very specific custom builds has a lot to do with fine art experience. When it comes to painting, in recent years I have opted to approach each session as its own mini exploratory journey, where improvisation and intuitive play have free rein. “It varies enormously from the many years of previous work, where I planned compositions on the computer and painstakingly reproduced them over a period of several months. After a decade of working this way, I’ve recently gained a lot of insight into only planning things out to a certain extent, leaving plenty of room for later experimentation. I find that I find a good balance with an instrument when the balance between active planning and improvisational playing is achieved.

You also noted that Depression-era jug bands inspired you to start making guitars. What attracted you to the instruments of this era?

“I was very early into the rural/country blues of the 20s and 30s, quickly realizing that some of my favorite musicians – Blind Willie Johnson, Lightnin Hopkins, Hound Dog Taylor, Big Bill Broonzy, etc. – learned the guitar on rudimentary homemade instruments. , most often from recycled objects. I think that was the first spark for me. I started making replicas of what I imagined they might both look and sound like around 2006. Soon a three-string fretless instrument turned into a few others and soon enough my space of painting was filled with dozens of tiny curious rectangular guitars. This was basically the beginning of Daddy Mojo String Instruments. After a chance encounter with Luca Tripaldi, my creative partner for the next ten years, the studio slowly transformed into a full-fledged guitar workshop. It still blows my mind to think about how it all started…”

The Rosetta model was one of your first offerings and is inspired by saloon and pre-war models. What can players expect from a guitar like this?

“Rosetta was one of the first electric guitar models to come out of our shop. It was originally designed as a sculpted parlor-sized superior instrument, with construction similar to a Les Paul or a Duo Jet. The shape was inspired by a 1929 Stella ladder braced guitar, made by Oscar Schmidt, which I owned at the time. A few years ago I took some time to redesign the model in an acoustic archtop in its own right. Basically the model has its roots in pre-war instrument design and I wanted it to be that way, through and through. The guitar features an exclusive Art Deco tailpiece and comes in two body sizes and scale lengths: 24.75″ and 19″ with 12.75″ and 9″ lowers, respectively; the latter essentially functioning as a six-string baritone ukulele, tuned to G standard.

“Early Rosettas featured a Charlie Christian pickup in the neck position, a chambered mahogany body, and a carved maple top. The latest 2.0 iteration is constructed with structured laminate sides (yellow cedar and mahogany), an arched laminate back, and a top made of five-ply pressed laminated spruce top. This new version sports a reissue DeArmond Rhythm Chief pickup that mounts on the fingerboard. I have to admit, these sound a lot closer to the sound of the original harnesses that DeArmond developed and were meant to modernize jazzboxes. acoustics from the dawn of guitar amplification.The Rosetta 2.0 also features some fairly old-school features like a Stauffer-style adjustable neck, 1.75″ wide nut, and slight V-shaped neck cutout.

You also introduced art deco ideas through models like Ozark and BeeKay. What prompted you to offer contrasting models à la Rosetta?

“In truth, many of my models are inspired by vintage instruments that I have owned over the years. I’ve always been drawn to more eccentric guitar makers like Kay, Supro, Danelectro, etc. This is where the Ozark and BeeKay models mainly find their roots. The BeeKay is inspired by a Kay Barney Kessel “endorsement” model from the 1950s and looks to legendary players like Howling Wolf and T-bone Walker. The BeeKay features a generously chambered mahogany body topped with a maple top, ensuring a lightweight instrument with surprising acoustic projection. The Ozark, on the other hand, is primarily built as a small-scale solid body. Often using reclaimed materials and platinum woods, it’s most often bound in a wide band of aluminum, alluding strongly to 1950s suburban nostalgia and forgotten American restaurants.

Your workshop is based in Mile End Guitar Coop. How does this environment inspire your work?

“After losing my shop in 2014, a space I had lived in for just over seven years, I moved into the Mile End Guitar Coop, which at the time housed Indian Hill Guitars, 52 Instrument Co., Island Instruments and a slew of other talented builders. I had worked with Nic from Island for about three years before, and when the guys heard that I was basically building guitars from my car, they kindly invited me to stay as long as needed. What was meant to be a temporary fix turned into perhaps one of the most important business decisions I made that same year. “I moved in as a full-time member a few months later and haven’t looked back since! The space was originally founded by Jeremy and Mike, who met while apprenticed to master builder Sergei de Jonge, who was apprenticed to luthier Jean Larrivee in the late 1960s. You can imagine the level of skill and knowledge that flows here every day. Since then, we have integrated our shared workspace into a fully-fledged cooperative entity with ten active members. 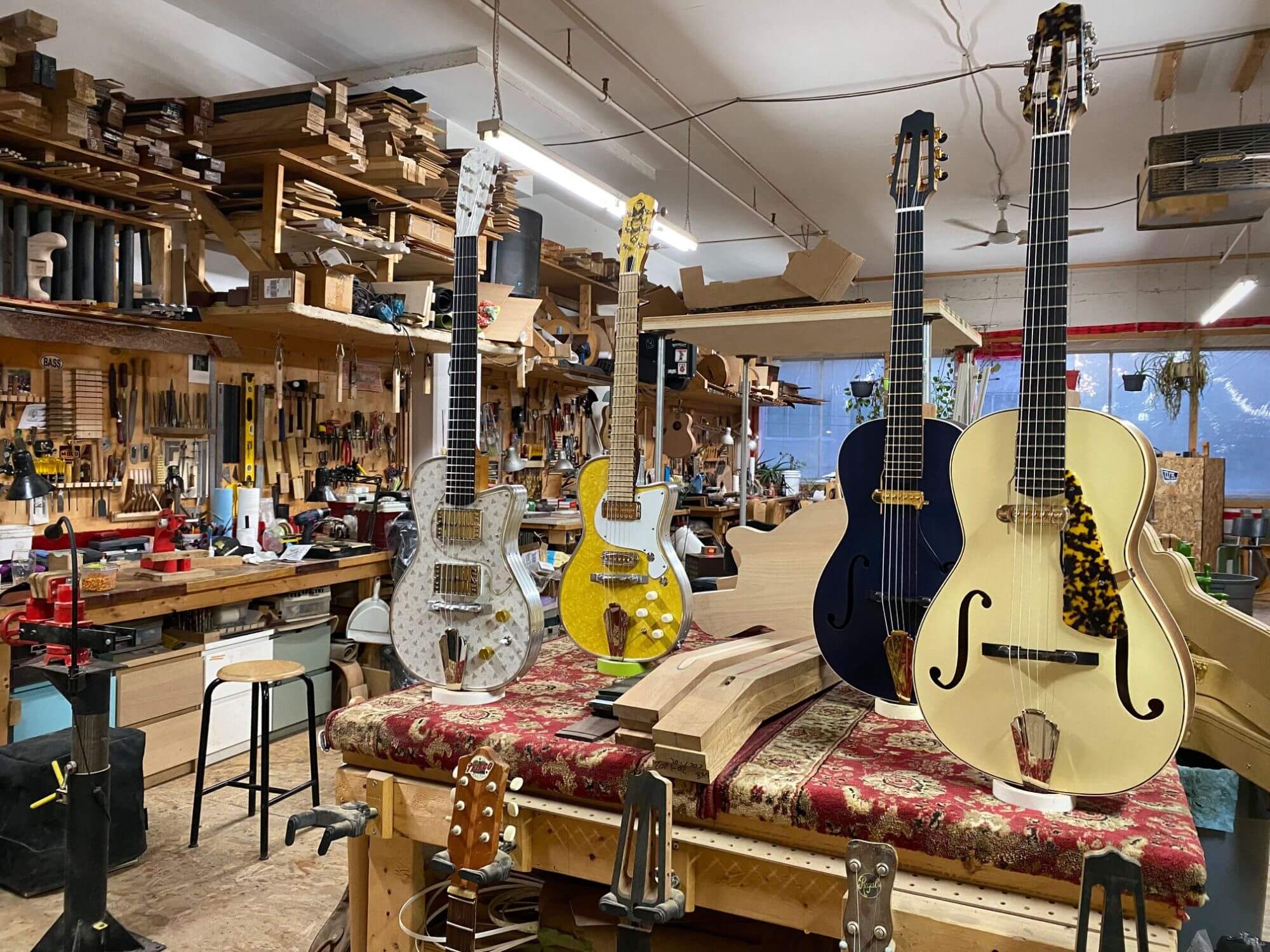 What draws these revered luthiers to Montreal?

“In my mind, Montreal has always been a hub for musicians, artisans and creatives. Even with the recent inflationary trend, the city remains one of the most affordable Canadian urban centers to live and create. There is a constant migration of musicians coming here from the east and west coasts, providing many opportunities for the repair and sale of instruments for a luthier. Along with this, the city has hosted one of the world’s largest violin-making showcases for several years in a row – The Montreal Guitar Show, which ran alongside the famous Montreal Jazz Festival. the city and attracted a lot of people. attention in this regard. There are also two reputable guitar schools in the province of Quebec – the École de Lutherie Bruand here in Montreal (where two of our co-op members studied) and the École nationale de lutherie in Quebec. Basically, 20 to 30 luthiers graduate each year, adding to the already effervescent pool of luthiers working from here.

Did you have any external investments at the start?

“Fortunately, I was able to manage the purchase of minimal materials and equipment/machinery early on, with funds generated solely from sales of cigar box guitars. Daddy Mojo was one of the first companies to manufacture and market the instrument at large with a network of dealers in a few Montreal boutiques, quickly developing representation in North America, Europe and Asia.There have certainly been huge ups and downs over the years. years and I feel extremely lucky to have stayed afloat through recessions and downturns.A conscious decision was made on my part about five years ago to develop the line of archtops and solid bodies more seriously. sense, I really felt like I was starting all over again. Orders for these instruments were hard to get at first. I would finish a project and if I was lucky, a new one would come my way, basically alive from instrument to instrument.

“Selling guitars primarily online can be daunting, I think people need to trust and ‘get to know’ a brand or manufacturer for several months, sometimes years, before taking the leap and investing in a new one. guitar. That kind of trust definitely takes time to build. I’m extremely grateful to have a small waiting list for instruments these days. It’s definitely a great place for a guitar builder and that’s a relief also part of the financial stress. Although it is quickly replaced by another type of stress, such as meeting the deadlines of the instruments, which I continue to get used to. In our business, we say ‘you are successful if you can live off it.” Getting rich is not really an option, you do it for the love of the job and also for the freedom to work for yourself. 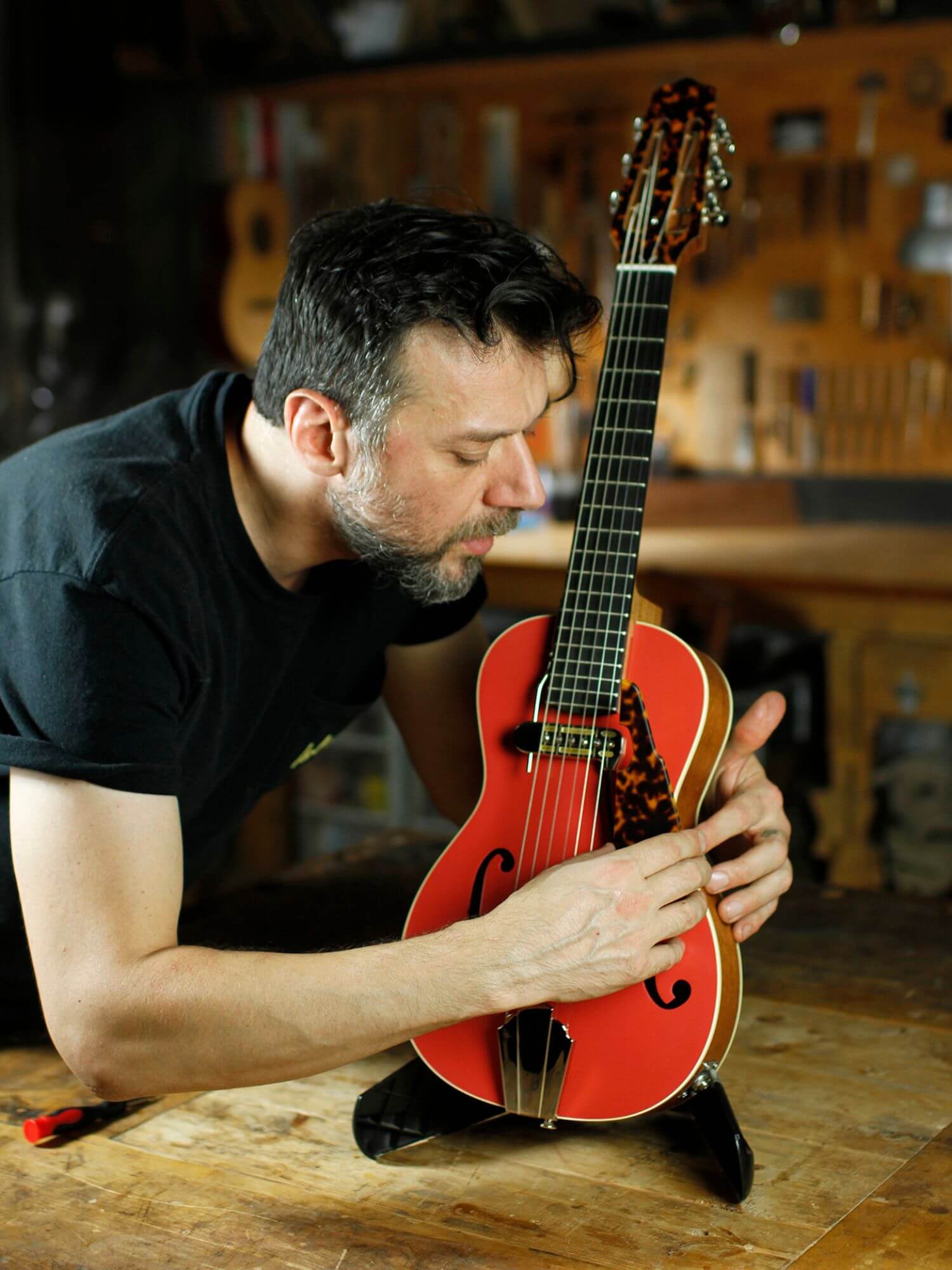 When did you realize you had a viable business?

“I would have to identify this moment with the first time I saw one of our instruments in a music store. Having your work alongside brands you grew up with and admire is quite a surreal experience at first. When our first US dealer (Truetone Music in Santa Monica) placed a “re-order” after selling their first instruments, I realized I would be doing this for at least a few more years! »

Elsewhere, musicians such as Ronnie Wood, Nels Cline and Jack White have been seen using your guitars. How does it feel to have your company represented by such prominent music icons?

“I mean, it’s obviously an incredible feeling. The Ronnie Wood connection really struck me since the Stones’ Steel Wheels show in Montreal was the very first stadium concert I attended as a kid. Meeting Jack White and seeing him play one of our guitars on stage was also completely unexpected and surreal. These moments definitely make up for the long nights spent obsessing over every detail of a build, or doing the 5th iteration of a pickguard in a quirky material just to see if it fits better! [laughs] Truth be told, emails received saying you’ve brought the gift of music into a home, or that a custom instrument has taken a customer’s playing in whole new directions are equally gratifying. That’s what makes it all interesting.