Cliff McGaha’s creations are filled with surprises and songs.

One still looks like moonlight; the sculpted head of Jerry Garcia of the Grateful Dead, with tiny glasses, floats in another. One is Rolling Stones-themed, with red lips, a hanging tongue, and a high-top cymbal; another evokes Egypt, with its clear pyramid and pharaoh’s dogs. There’s even one that can be used to practice putting a golf ball.

Some are made from antique radios; some incorporate old drive-in car speakers; two are collaborations with artisan carpenter Ron Burcham of Benton. Twinkling LED lights adorn each one.

And they’re all booming stereos that McGaha – born and raised in North Little Rock – has built from old furniture, pipes, instruments, wires, mason jars, switches, sculptures and whatever else he pleases.

He calls them Gizmos.

It’s a sunny winter morning, and McGaha, a bearish guy with gray hair, a goatee, and a perpetual grin, is at Consign Design on Maumelle Boulevard in North Little Rock.

His Gizmos have been selling here for just over two years. Her brother-in-law Steve George first mentioned them to store owner Steve Hobbs.

“He shows up with a shelf model of one of the Gizmos,” Hobbs recalls. “When he started demonstrating this stuff, I fell in love. I said, ‘I’m sorry but I can’t log it because I’m going to write you a check. This one is mine. But if you make any more, I can sell them.'”

McGaha has sold more than 40 gadgets in the store, including one recently to former Governor Mike Huckabee. Not only is this one a stereo, but Huckabee can also play guitar on it.

Gadget prices range from around $1,400 for a desktop model to around $4,000 for larger pieces.

When asked where his ideas come from, McGaha laughs. “I think my creativity was born out of too much sugar and cartoons when I was a kid.”

He studied in the radio, film and television program at the University of Arkansas at Little Rock before dropping out and interning at radio stations KAAY and KLPQ. From radio he transitioned to video, doing camera work and editing for live productions and Little Rock news stations.

“The video experience has taken me to many places,” says the 63-year-old. “I’ve been on just about everything that flies, from Concord to hot air balloons…and I’ve pointed a camera at almost every president since Ronald Reagan.”

He also did sculpture, which is useful for creating things like Garcia’s image.

“I just fell into [sculpture]”, he says. “I have no formal training. I had playdough at home and started making cartoon characters.”

A few years ago, McGaha underwent open-heart surgery to repair an aneurysm. Boredom caught up with him during his recovery, and he began making lamps and selling them at flea markets.

Then he came across steampunk, the aesthetic that marries retro steam-powered technology with a futuristic sci-fi twist, and lamps soon gave way to what became Gizmos with their switches, gauges, lights and sound. .

There is another obvious influence on the collaborations with Burcham.

“There’s a steampunk touch to it,” says the carpenter and artist, “but what I do is more art deco, so I call it deco-punk.”

Burcham and McGaha hit it off when they first met a few years ago at a party at Consign Design.

One of the pieces they made together is called Chakte Viga, a round coffee table named after the wood that forms the ring that wraps around the speaker covers. Other woods used in the table include white oak, red oak, walnut, birdseye maple, cedar burl, cypress, ebony and more.

Just before the pandemic, Burcham launched a large piece inspired by a vintage industrial clock.

“About a year ago we got back together, and I showed it to Cliff, and he took it from there,” Burcham said.

McGaha outfitted it with pipes, vintage speakers, and a plasma globe and turned it into a Gizmo.

“Basically, I just find something and give it to him and he does the rest,” Burcham says.

Just as the pandemic began, McGaha retired from her job at AV Arkansas, which provides AV support for meetings and other events. Now he dedicates his time to making Gizmo with the help of his wife, Brenda, in their home in Jacksonville. And he went from building them sitting in his chair in their living room to being a real store.

“I like to say this is my version of making birdhouses [in retirement]but mine is banging,” he laughs.

He and Brenda scour flea markets, estate sales, eBay, and other sources for materials, and then the creative process begins.

“Watching a track long enough, and that sort of dictates what I do,” he says. “I’m going to have an idea, get excited, and go from there.”

As more and more people discover his work, they also want to contribute.

“I started getting calls and text messages from people wanting to know, ‘Hey, can you use this?’ They find things and text me wanting to help. Where did that come from? You sell someone something and then they want to participate.

McGaha says he likes to keep modern elements out of sight and has clever ways to conceal each unit’s subwoofer. He will sometimes use old five-gallon metal gas cans that he fitted to the subwoofer. For the moonshine, he used an old copper vessel. Another Gizmo’s subwoofer is hidden in a teapot. Lately, he hides subwoofers in cajons, a box-shaped percussion instrument.

The rear speakers of the Gizmos are angled to bounce sound off a wall, a technique inspired by Paul W. Klipsch, who founded a high-end audio company in Hope in 1946.

The Gizmos are equipped with a Bluetooth amplifier that allows the user to listen to music from a smartphone, computer or tablet. McGaha also made Gizmos with turntables for vinyl record enthusiasts.

Making Gizmos ticks all the right boxes for McGaha.

“I have an audio and video engineering background. It mixes all of that with sculpting. It’s two different sides of the brain, electronics and art, and I can use it all.” 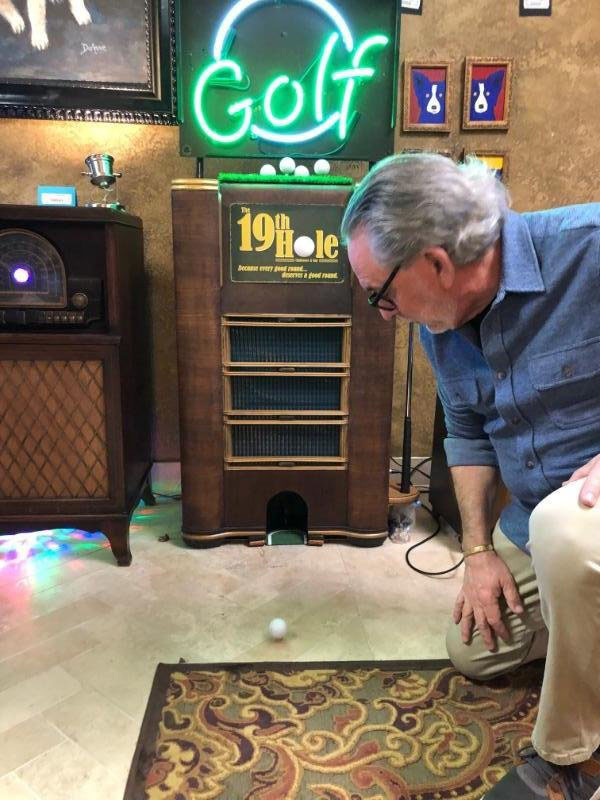 Steve Hobbs, owner of Consign Design in North Little Rock, watches a golf ball roll away from a golf-themed Gizmo made by Cliff McGaha. The gadgets are stereos that McGaha created from repurposed parts. (Arkansas Democrat-Gazette/Sean Clancy) 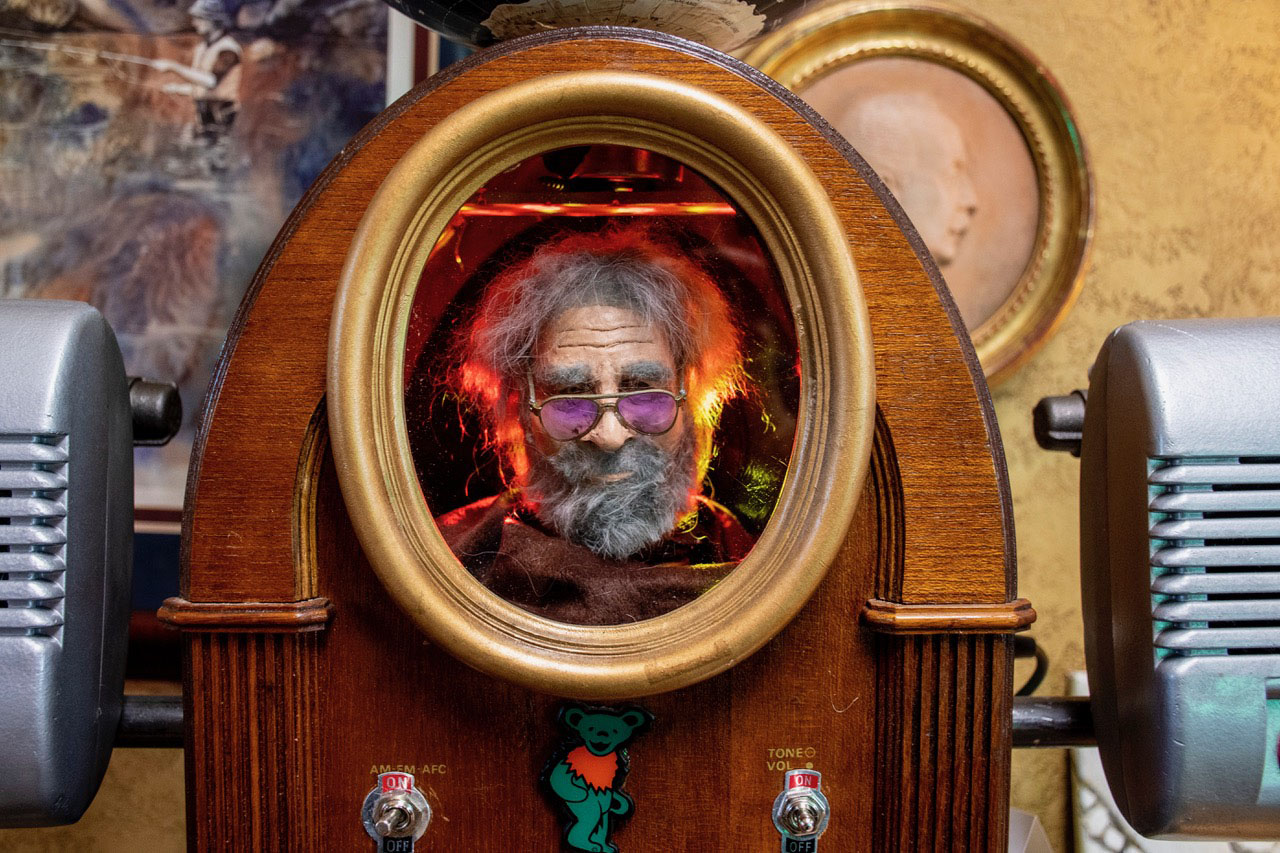 Detail of one of Cliff McGaha’s Gizmos on 08/12/2021 at Consign Design in Maumelle. (Arkansas Democrat-Gazette/Cary Jenkins) 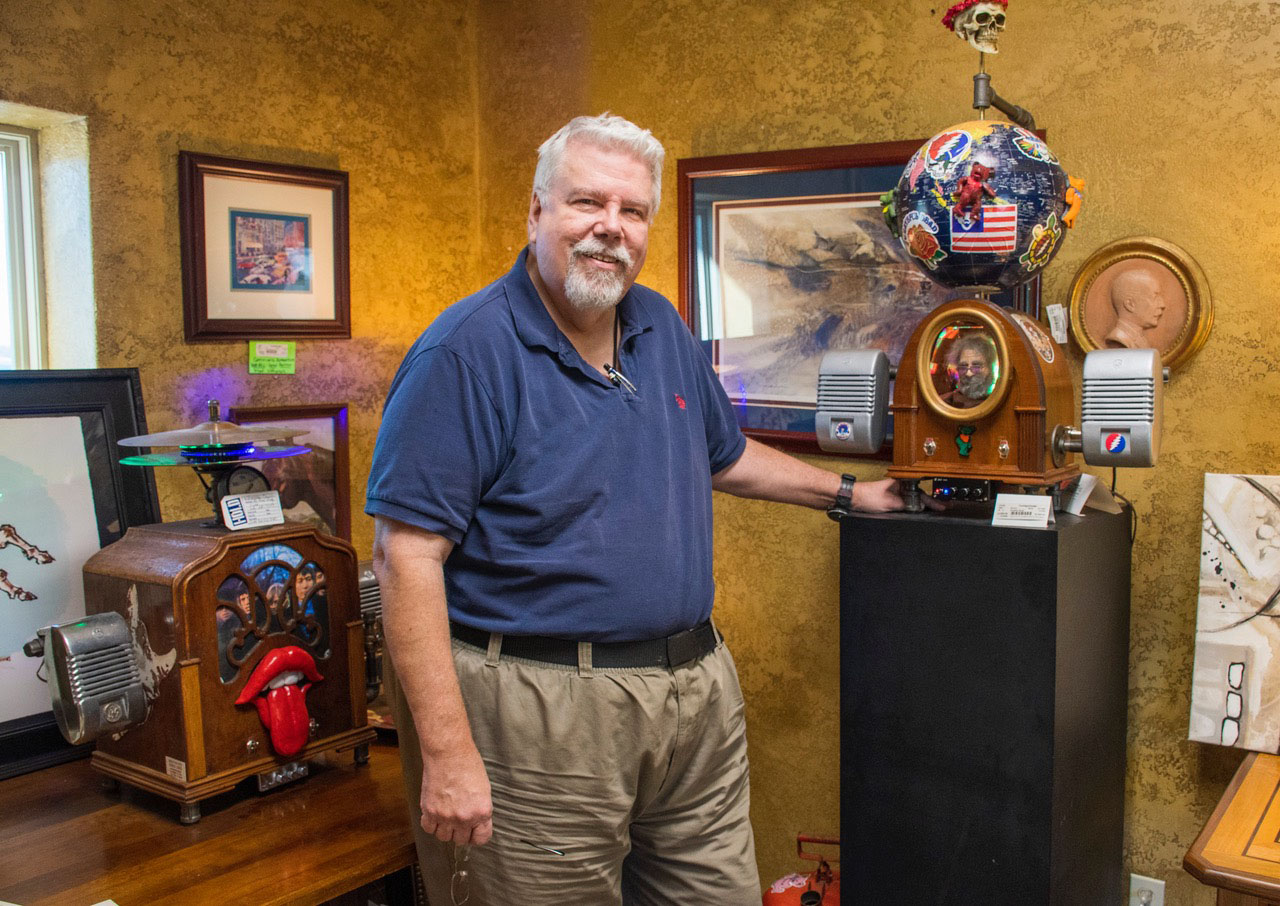 Cliff McGaha and his Gizmos on 08/12/2021 at Consign Design in Maumelle. (Arkansas Democrat-Gazette/Cary Jenkins)